In 2017, Escuela Caracol celebrates its 10th year. In honor of this anniversary we are recounting our history and remembering how this happy sanctuary came to be, with a campaign called «10 Years of Stories.» To begin, here’s our origin story, from Dr. Allen Wilson, father of co-founder Joshua Wilson:

When my wife, Suzanne and I, first visited the property on which the school exists, the only building existing was what is now the office and area outside the office (plus a small bodega). This building was the home of Joshua and Courtney, the founders, for many months.  The first classroom to be built is the classroom which is adjacent and just down the steps from the the kitchen.  At that time there was only a couple of trees and lots of boulders and rocks on that site.  Josh’s vision for the classroom was that it be built as a Golden Rectangle, whose dimensions are based on the Golden Ratio, also known as the Divine Proportion.  What exists today is the result of this vision, and the hard work done by the first Guardian of the school, Nicolás Sacach Mendoza.  Nicolás had been working on the property where the school is located since 2001, and continued to do so when the school was founded in 2007.

The founders with their daughter in 2007

The memory I want to share is of the groundbreaking for the new classroom in July of 2007.  From the moment the first shovel full of dirt was lifted, we realized that building a classroom on the existing property would be a huge task.  Every thrust of a shovel seem to hit rock.  The more we dug, the larger the rocks seem to get… I’m talking boulder-size! I was totally amazed at the skills that Nicolás used to chisel and sledge hammer the boulders into manageable sized rocks. Nicolás was not a tall man, but he was stocky and built as strong as the rocks we were attempting to remove.  Each blow of his hammer on the chisel held in his steady hands produced what felt like a small earthquake to the ground on which we stood.  Every powerful blow produced a muffled grunt from his mouth and another bead of sweat on his brow, but he never lost the smile on his face.  He worked tirelessly from sun-up until sun-down for days, until the three-foot deep footing for the foundation of the classroom was dug. Upon completion of the trenches for the footing, he and several other friends worked for days mixing the ingredients for the concrete, and masterfully pouring the footings.

Nicolás was an artist in all he did at the school.  In our moments of “rest” while working on the classroom, Nicolás helped Josh and I put up the first swing on the school grounds. The swing continues to provide hours of fun for the children today. Nicolás was also one of my first Spanish teachers.  He and I would talk together, him helping me with my bad Spanish, and I, in turn, helping him with English.  We laughed so much!  As a part of the groundbreaking, Suzanne and I gave Josh and Courtney a wooden snail puzzle (emblematic of the caracol).  It has a small hidden compartment in which we placed some dirt from the groundbreaking. It was Nicolás who picked up a handful of dirt from which we filled the compartment.  I will never forget his smile upon doing that. 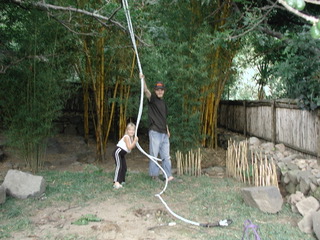 The swing at Escuela Caracol

To this day, the legacy that Nicolás created at Escuela Caracol continues.  The memory of this great man is one of my fondest.
-Dr. Allen Wilson
Note: Nicolás Sacach Mendoza passed away in 2012. To read more about him, click here. If you have a story to share please email [email protected] – we’d love to share it with our community!  And finally, thank you to Dr. Allen Wilson for sharing your words, photos and memories.
0 0 f.pineda https://escuelacaracol.org/wp-content/uploads/2021/07/logo.png f.pineda2017-06-15 14:44:552017-06-15 14:44:55How the First Classroom Was Built