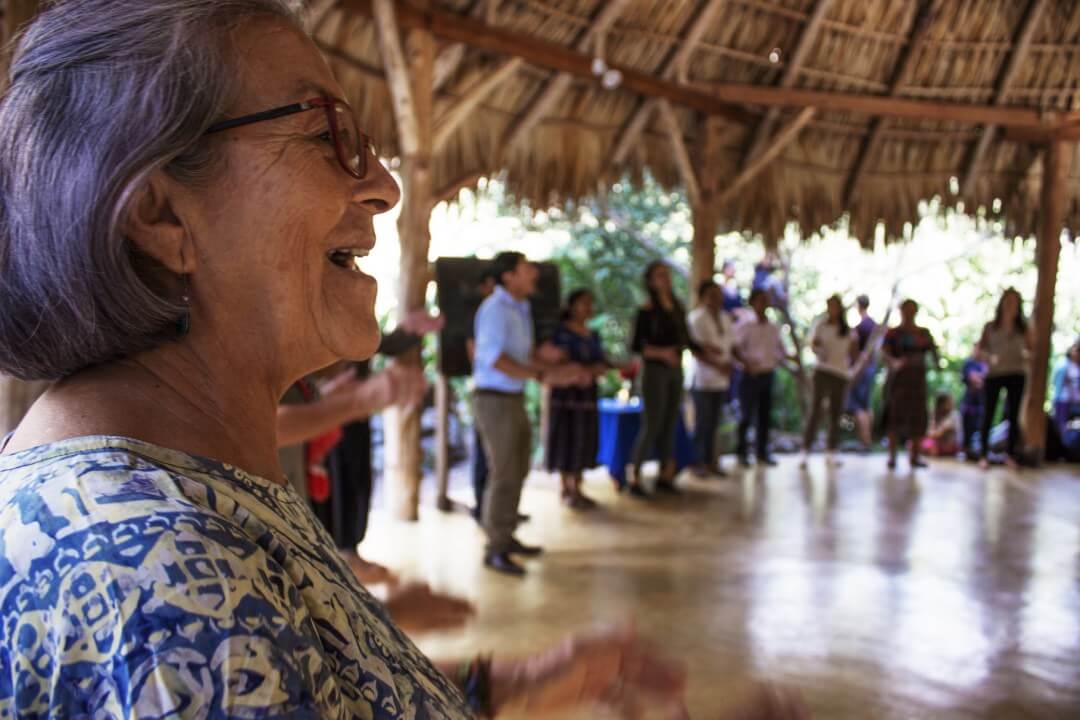 Gloria Elena Londoño Valencia was born in Chinchiná, Caldas, Colombia; She lived most of her adult life in Cali, where she worked as a Waldorf teacher for almost two decades. Her teaching motivation is to have the opportunity to follow the vocation of service she has experienced from a very young age which, as she mentions, is the motor of her life.

Her first approach towards Escuela Caracol was through Nana Göbel from FREUNDE, who recommended her as a Pedagogical Advisor. Before involving with Escuela Caracol, Gloria Elena worked in Luis Horacio Gomez School in Cali, where she finished two eight-year rounds. Her specialty within Waldorf Education lies in language and words.

She has deep studies in Anthroposophy, specifically in Biography studies, a subject she graduated from in 2020; this subject has shown its use as it was a bright tool use by Gloria Elena to help teachers, staff, and students alike. 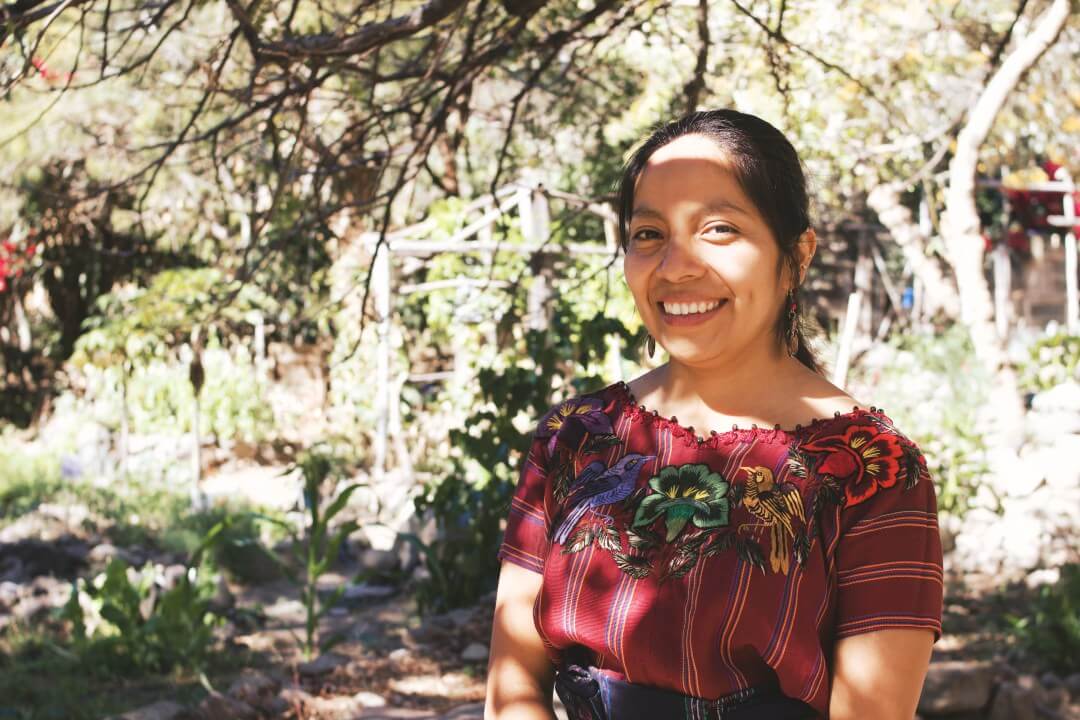 Marilily, as the children refer to her, has been working in KinderCaracol since 2009. She was born in San Marcos La Laguna and comes from a family of 10. In 2014, Marilily finished her Waldorf training at the Centro Antroposófico in Cuernavaca, México, becoming the first indigenous woman to complete this training. Marilily is the lead teacher for our kindergarten children. Her manner in the classroom is warm, gentle, bright and cheerful, and she enjoys sewing, singing, drawing and painting. 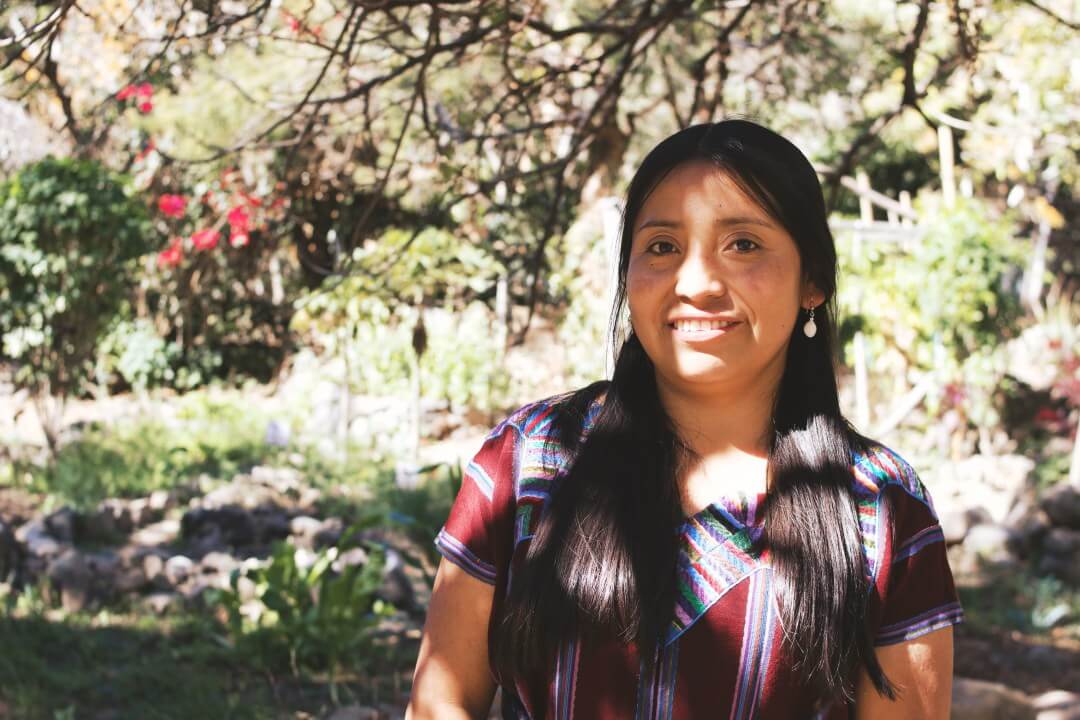 Sandra has been working at Escuela Caracol since January 2011. She was born in San Marcos La Laguna where she lives with her parents, four brothers and two sisters. She studied computation in San Marcos, Sololá, and Santa Clara, all areas around Lake Atitlán. She enjoys reading, painting, cooking, embroidery, and spending time with friends. 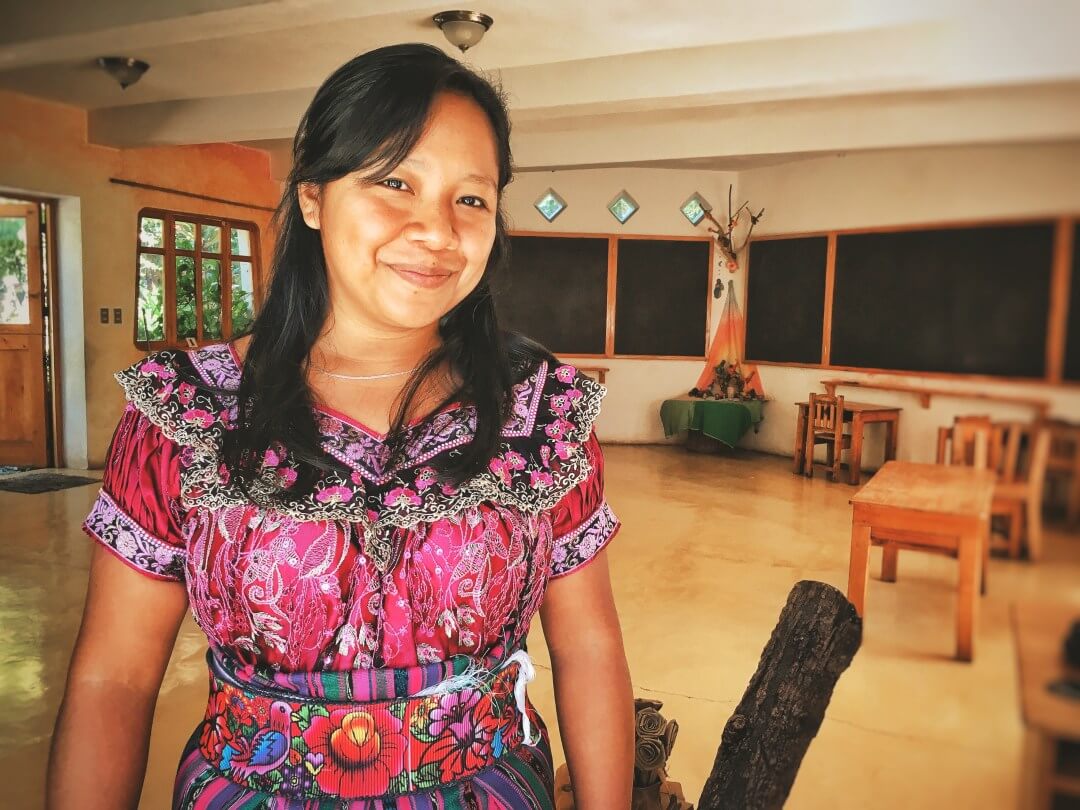 Sonia was born in San Pablo la Laguna, she is a bilingual / intercultural elementary teacher with an Associate Degree in Pedagogy and Educative Administration. She out-stands for her knowledge of handcrafts and drawing. She began approaching Escuela Caracol on the 2017, when she enrolled in the schools workshops and became an observant of elementary groups. Emiliana was born in San Marcos la Laguna and comes from a family of 9, she joined the family of Escuela Caracol in 2018 as the first grade main teacher, she also teaches kaqchikel to all the elementary groups. She has the “bilingual/intercultural” teacher degree, she is currently coursing the “Profesorado de segunda enseñanza” on the associate degree level and the Waldorf formation in Cuernavaca, Mexico. She loves pedagogy and working with children. 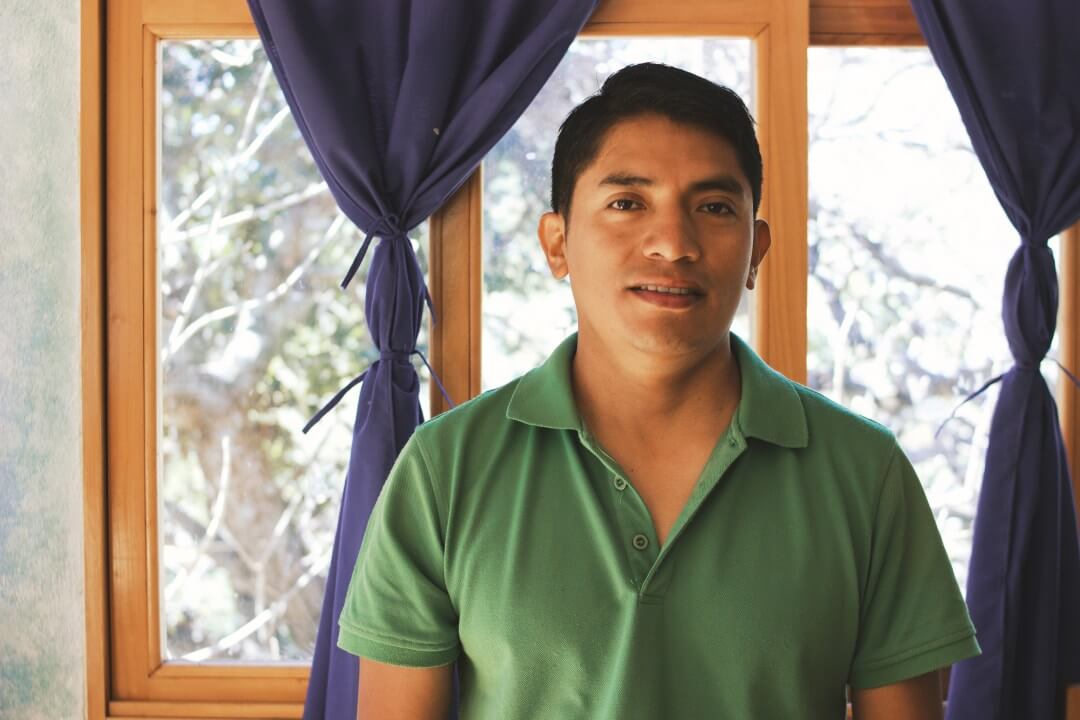 Diego is the primary fifth grade teacher, as well as our music Teacher (Mayan local language). He is also the president of the “Caracol Association” and the Primary Coordinator. Diego deeply enjoys working and playing with children and making music, both, in Spanish and Kaqchikel. 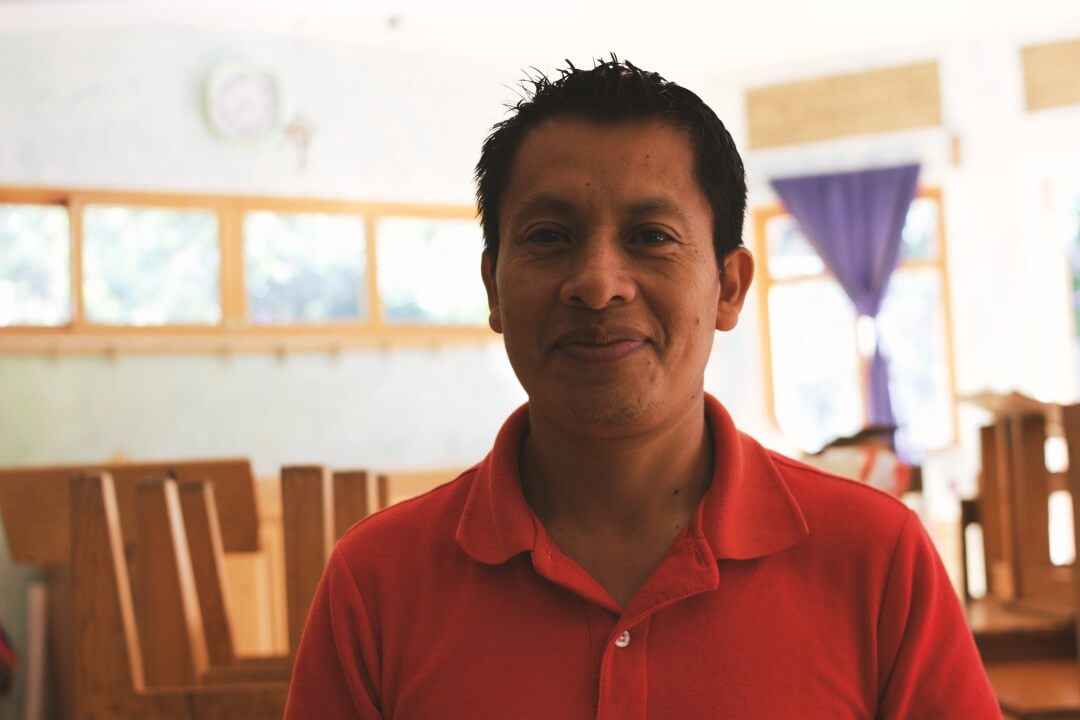 Nacho joined Escuela Caracol in 2011. He was born in San Pablo Laguna, where he lives with his wife and two children (both of whom attend Escuela Caracol). His title in Guatemala is “Teacher of Creative Expression” with an emphasis in music, and he has worked as a teacher for nearly ten years in a variety of institutions. He is also working on a university degree in pedagogy. Nacho is currently teaching specialty subject classes in handwork. He brings a wide range of expertise in handwork (he is a professional tailor and is familiar with many local handwork traditions, from weaving to mat-making), and has considerable training in the arts, from music to dance to theater. Nacho is currently completing his Waldorf training at the Centro Antroposófico in Cuernavaca, México. 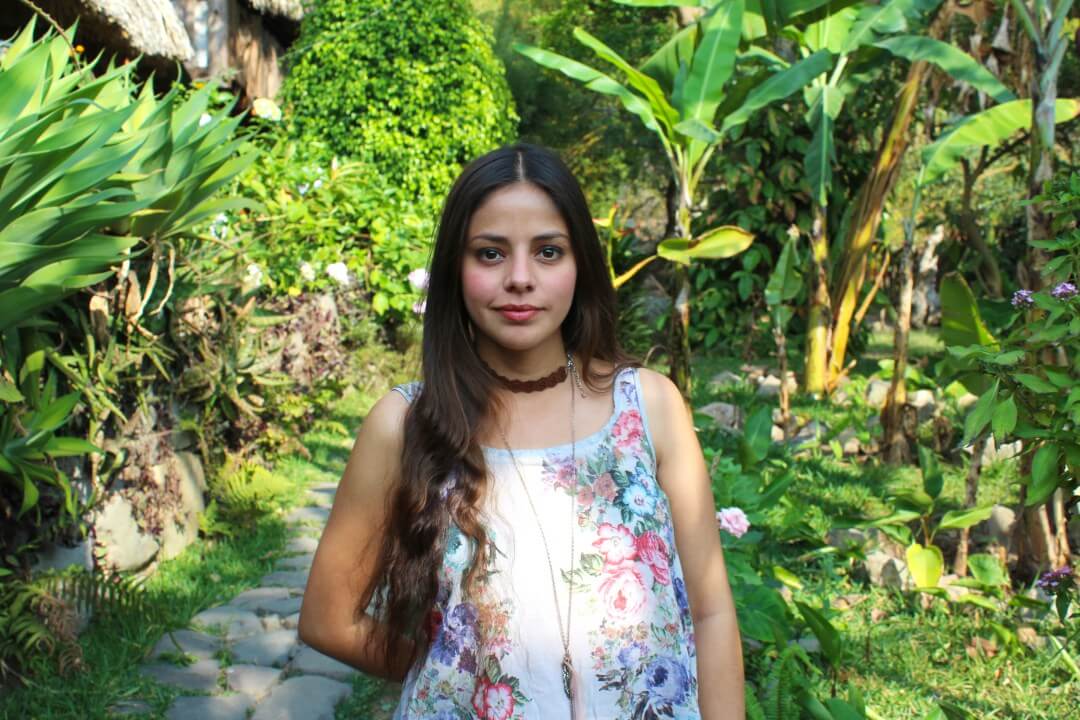 Carmen has worked at Escuela Caracol since 2,017. She was born in Quetzaltenango, Guatemala and arrived at Lake Atitlán looking to approach to anthroposophy and Waldorf pedagogy which she believes are ways of hope for Guatemalan communities. Carmen is an elementary teacher, psychologist and anthropologist, she also has received formation in the artistic fields. She deeply enjoys the way our students can develop artistic skills and thinking while being free and happy at our school, she believes that freedom is the best gift any children can have. 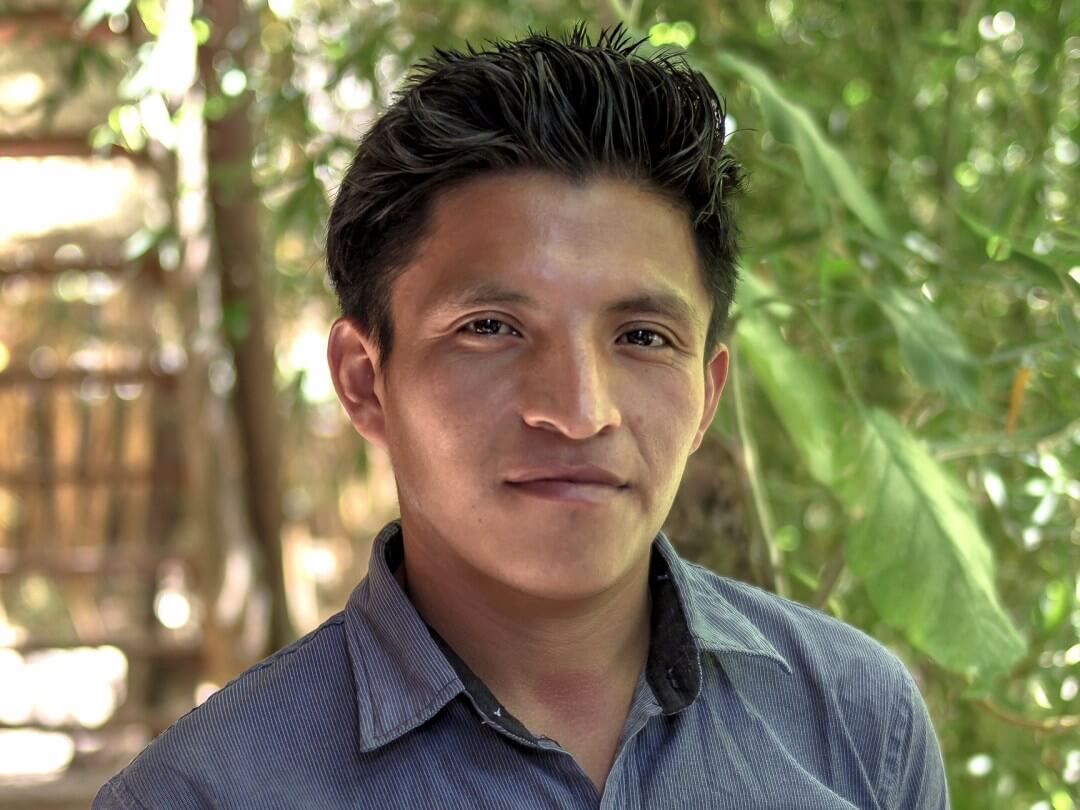 His first contact with Escuela Caracol was through Social Networks. Santiago’s first experience within the Waldorf environment was a watercolor workshop imparted by our Mentor, Thomas Wildgruber.

Santiago kept involving with the Escuela Caracol’s community until he began working at the school as the gardening teacher with the primary students in 2018. During this year, Santiago began with his training with weekly meetings with our pedagogical director, Gloria Elena Londoño, being introduced into Waldorf Pedagogy and Anthroposophy.

In 2019, Santiago went for the first time to Cuernavaca, Mexico, to follow his first official Waldorf training journey.

Santiago has shown special sensitivity towards the arts, especially to oil painting, having outstood since very young for how easily he could express himself through arts.

What motivates Santiago as a Waldorf teacher, is to have the opportunity to share in a novelty and fun way the knowings that will serve as nurturing tools for our students to grow as holistically developed human beings.

Santiago is currently studying in the “Universidad del Valle de Guatemala” to become a Maths and Physics middle school teacher. 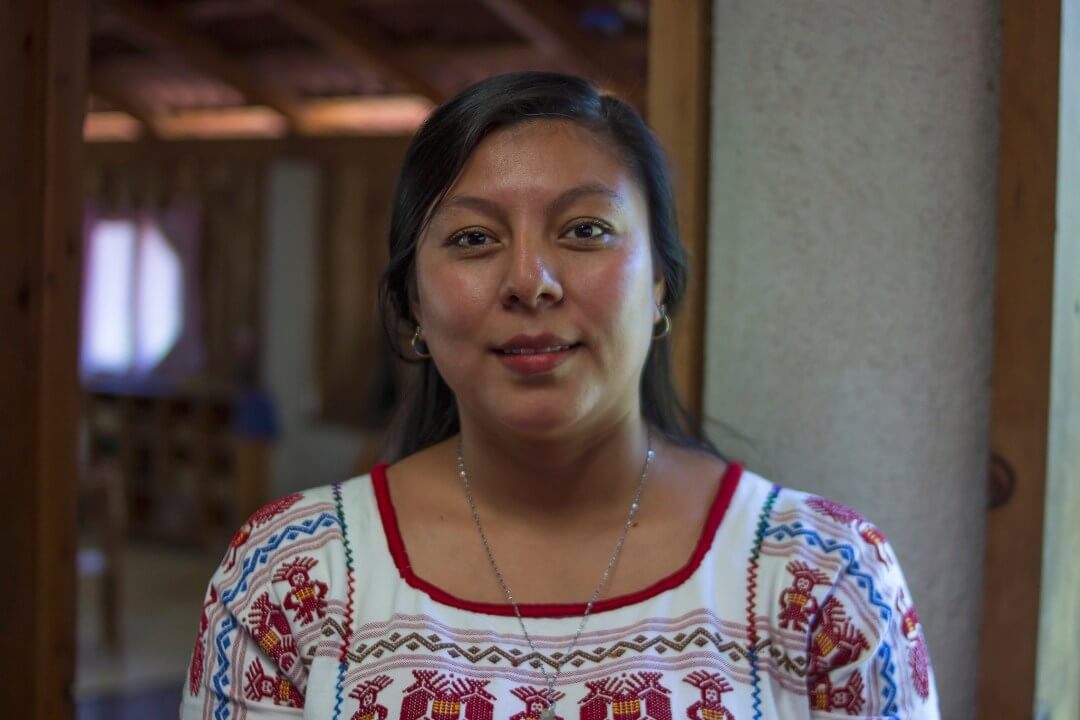 Wendy Cholotío is currently one of our auxiliar kindergarten teachers.

Wendy was born in San Juan la Laguna and showed a very special call towards teaching and small children from an early age. She graduated as a Childhood Bilingual Intercultural Teacher in the Escuela Nacional Bilingüe Intercultural, from Santiago Atitlán.

Wendy heard of Escuela Caracol through social networks, during her first visit to our school, she was impressed by the gardens and the general happiness of the students.

Wendy worked in the traditional education system for three years as a kindergarten teacher. In Escuela Caracol, she has received constant training and tutoring on the Waldorf pedagogical approach by the kindergarten titular teachers and from our pedagogical director, Gloria Elena Londoño.

Such special approach Waldorf Pedagogy has to teach through arts and ludic activities, and the happiness, joy, and enthusiasm shown by the Escuela Caracol’s students, have been the greatest motivations for Wendy, being one of her greatest dreams for her little son to become a Escuela Caracol student as soon as he turns three and a half years. 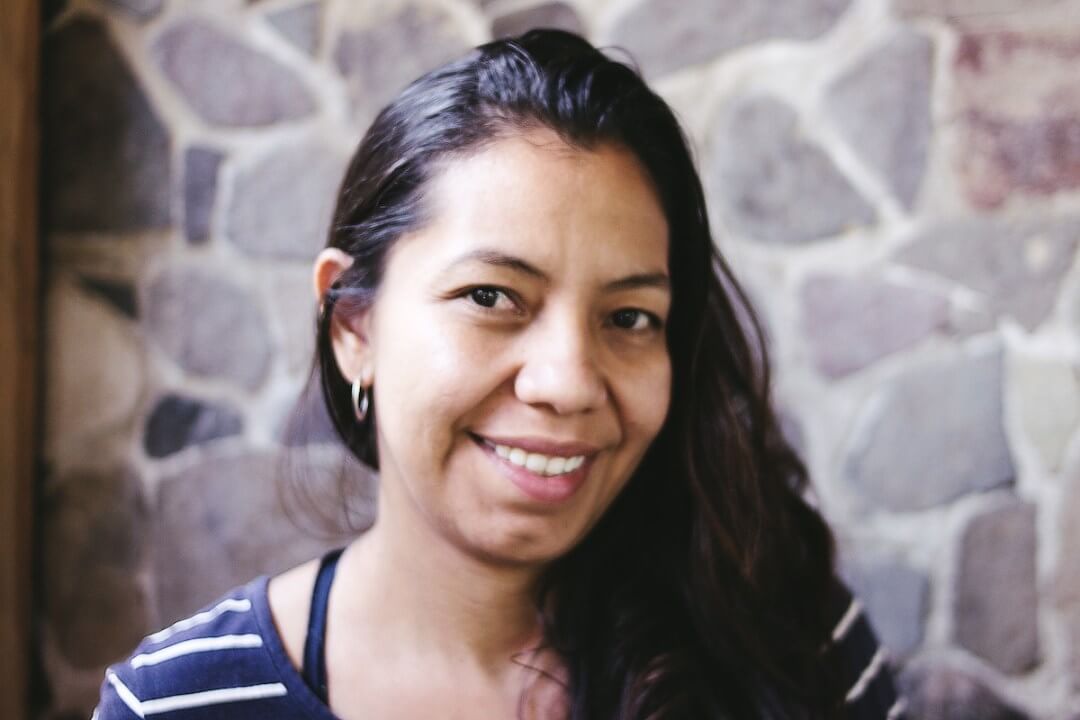 Ana Cecilia Mayén Pérez was born in Guatemala City, where she lived for most of her life. She graduated as a bilingual kindergarten teacher and began working in the traditional system back in 2004. In 2017 she had her first approach towards Waldorf Pedagogy thanks to her sister, who was teaching at Trinus School in Guatemala City, Where Ceci also worked as a kindergarten assistant teacher.

She began working at Escuela Caracol in 2019, being, since then, one of our dear kindergarten assistant teachers, her specialty relies on hand-work, highlighting in the manufacture of raw-wool dolls and tricot knitted animals.

She has received constant training since involving with Waldorf pedagogy, having participated from three Maestras Jardineras Conferences; two in El Salvador, and one in Mazatenango, Suchitepéquez. From the moment Ceci became part of our family, she has been in constant training with our Mentor and Pedagogical Director, Gloria Elena Londoño.

“Witnessing the happiness and joy of boys and girls every morning, the way they learn and appropriate the knowings we share in the classroom, as well as the astonishing ability they show towards everything that surrounds us, plus the enthusiasm they show at every activity we develop in the classroom, motivates me to give my best every single day. I have no doubt, children are the best teachers”, are Ceci’s emotive words.