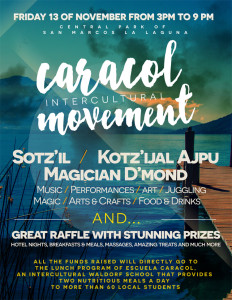 On November 13th, in the central park of San Marcos La Laguna, our entire educational community created the Caracol Movement (“Movimiento Caracol”), an intercultural event with over 7 hours of music, dance, magic, juggling, art and gastronomy with the purpose of raising funds for Escuela Caracol.

This event was the inspired and organized by two of our Caracol teachers, Ervin Quiacain and Diego Sacach. The two of them took on the work of planning the event and organizing many different commissions of parents and teachers to handle the various parts of the event. Many parents came together to sell a variety of food options as well as handmade crafts. The Pyramids Meditation Center in San Marcos volunteered a team from its community to MC the event, and many local businesses offered items for an enormous raffle (meals, massages, hotel rooms, even items like dog food and buckets!). It was a tremendous encouragement to feel the wide-ranging support of local institutions and businesses.

The entertainment of the night was a beautiful exposition of the cultural variety that exists at Lake Atitlán. The “headliner” was Sotz’il, an extraordinary performance group that works with ancient Mayan music and art in a way that powerfully speaks to contemporary times. Their performance was a high energy yet sacred and moving experience, during which a local artist composed a painting inspired by their music (which he then donated in an auction).

In addition to the ancient Maya inspired music and art, the night featured more modern elements, like a magician, juggling, clowning, fire dancing, and even a Maya rap and breakdance group from the neighboring town of San Pablo. It was sugh a joy to see all the amazing talent that came out to support Escuela Caracol.

It was the presentation of the Caracol students, however, that stole the show. The students brought a vibrant mix of music in Spanish, Kaqchikel and English. They played songs on their flutes, including a recorder ensemble. The fifth and sixth graders even presented a song in which each student had to write their own verse in Kaqchikel with an almost rap-style speed. That class also presented a beautiful piece of classical Spanish music on their guitars.

So after months of preparation, the night of the event was an enormous success that allowed us to reach our goal of Q20.000 (about 2,600 US dollars) (about 2,600 US dollars) thanks to the massive support we received. We are deeply grateful to each and every one of the individuals, artists, musicians, groups, institutions and local businesses that supported us. From the bottom of our hearts we want to express our most sincere gratitude and appreciation.